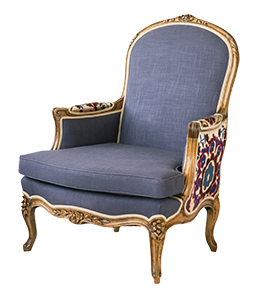 Chair Divine Dinka is a so-called Bergère Louis XV chair. While King Louis XV ruled a new trend appeared also known as goût pittoresque. This trend typically represented the more picturesque details, which we later know as the rococo period. The front of the chair is upholstered with a new blue fabric Lamba from Osborne & Little. On the back of Divine Dinka a Suzani is used. Suzanis are embroidered pieces of cloth made in the region of Central Asia. They are an important part of a girl’s dowry. The suzani used at the back of the chair shows flower motives. Most people believe that the flower motives are symbols of fertility and prosperity.