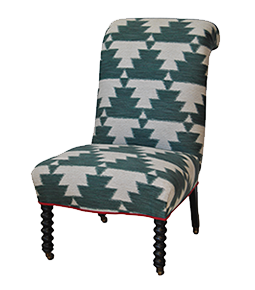 Merry Mandika, is an antique nursing chair from the third part of the 19th century (1850-1875). The front of Merry Mandika is upholstered with fabric Mohawk from Lorca. The back has been covered with a Suzani from Uzbekistan. Suzanis are embroidered pieces of cloth made in the region of Central Asia. They are an important part of a girl’s dowry and are also used for decorative purposes in Central Asian households. The suzani used at the back of Merry Mandika shows a bird and flowers. A bird symbolizes the connection between heaven and earth. Most people believe that the flower motives are symbols of fertility and prosperity.