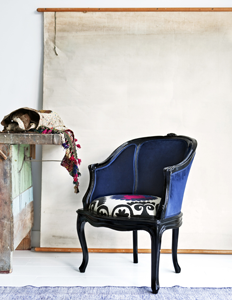 Karim is a so-called French ‘tub chair’. These type of chairs became in-demand around 1780 when people were looking for comfortable smaller chairs, yet still with a luxurious and easy seating. This phenomenon was copied in Europe and beyond, however the French tub chair, the bèrgere, became one of the most popular. Karim is upholstered with Varese, a fabric from Designers Guild. A suzani with a bright pink teapot is used on the seat of Karim. A teapot symbolizes hospitality and abundance in Uzbekistan.